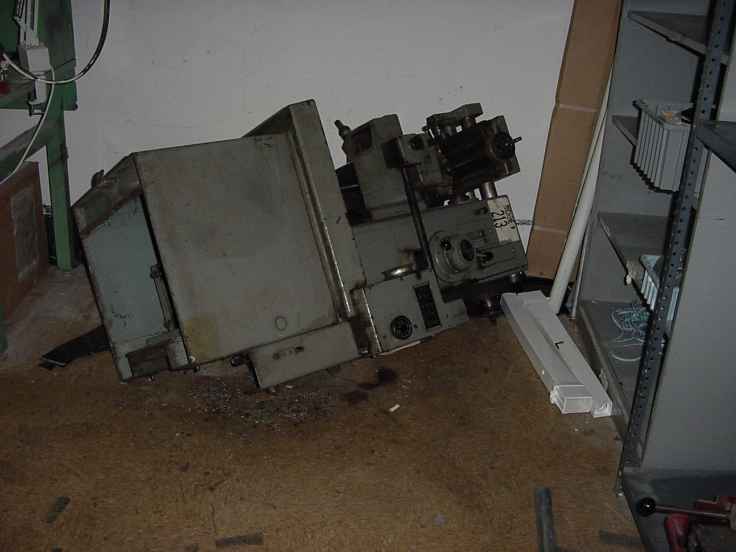 Whoops! Here's where we start the tale, at a DoveBid auction at a bankrupt manufacturing plant in Deerfield Beach, Florida. Why is this exquisite 1000-pound machine laying helplessly on its back, bleeding oil onto the floor? The riggers at the auction wanted $200 just to hoist this thing on my rented flatbed trailer. Since that was a substantial fraction of what I had just paid for the item, and having successfully moved much larger machines myself, I decided I could move this on my own. Hah!

My first attempt was to disassemble the machine into pieces (table, knee, main column casting, base) that could be safely lifted with less effort and equipment. But after getting the table mostly off, it was clear that the complexity of the power feed and other components made diassembly a major task, further complicated by the lack of an owner's manual.

My second attempt was to jack it up with my Bridgeport-mover mattock onto wood blocks, high enough to slide a dolly underneath. Once outdoors, I could winch the dolly up ramps onto the trailer. What I failed to appreciate was how unbalanced and top-heavy this machine is. Due to the arrangement of the main column casting, the center of gravity sits hardly forward of the rear of the 20-inch base footprint. Jacking with a mattock involves a fair amount of tipping this way and that. After a few increments, it unexpectedly started to tip.

Of course I was well aware of the 2nd principle of rigging and machinery-moving: that one does not put one's body where one cannot get out of the way if the subject machine "starts to go" (see my other principles, below). But I had been traveling and working early this day, a 14-hour shift at this point, and I should have known that one's mental acuity and judgment are not to be trusted with hazardous work in such moments. I found myself reacting a little too late, and a little too close to the wall, to get quite out of the path of 1000 lbs slowly tipping towards my torso.

In a near-miss with serious injury, the sharp end of the table lead screw (handle removed) raked across my thigh, leaving a 3-inch contusion that could have easily been a deep laceration, crushed femur, severed femoral artery, or worse. The wound was mostly to my pride: it is difficult to maintain nonchalance in front of bystanders, when they hear something this big drop onto the floor, and there you are, with your pants leg torn into halves and flapping in the breeze.

This was enough for one day. I could not stop wondering what it would have been like to have a leg crushed and impaled under a machine that no one on the scene was equipped to move. I decided to return, rested and better-equipped, on the morrow.

The next day I equipped myself with a shop crane (Harbor Freight 35915). This tool could do all the heavy lifting: placing the mill upright, placing it on my platform truck, and transferring it from the platform truck to the flatbed trailer.

Meanwhile, the professional riggers (http://www.aaamachineryriggers.com) had moved in a forklift, which hadn't been available the day before, to move some much larger circuit-board assembly machines elsewhere in the plant. As I began to set up the crane next to the Clausing, they offered to use their forklift to hoist the Clausing upright. I don't know if they felt sorry for me, or if they had nothing else to do for a while, or whether the auctioneer was worried I wouldn't clean up the mess I had made if I was dead. They attached a sling under the mill overams, with strapping to clinch it all the way to rear, and lifted the machine with the forklift forks. Soon the mill was upright and placed neatly on my platform truck. 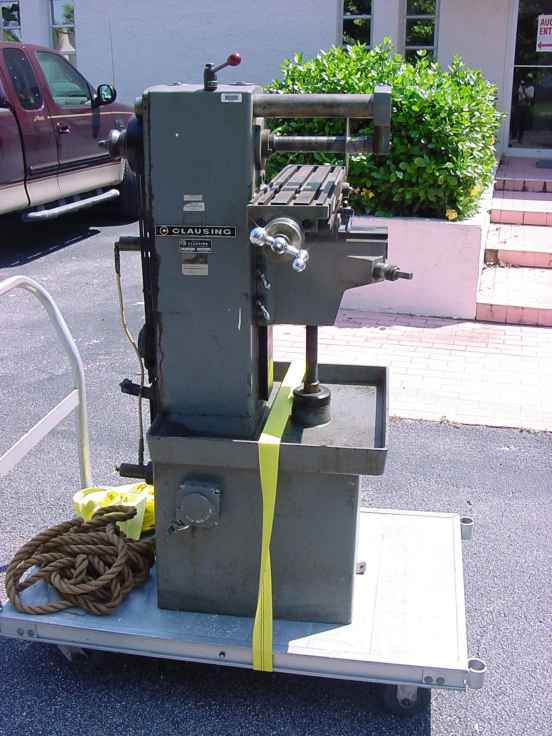 This photo shows the mill strapped onto my platform truck. This is a sturdy truck, all aluminum, and rated for 1000 lbs, not the cheap kind. You can see that I have used a ratcheting cargo strap to secure the tool to the truck; I did not want another surprise tipping incident. I could easily push the machine across the smooth factory floor.

Fortunately there was a wheelchair ramp by the front plant entrance to reach the parking lot. The only other access was up many steps, or off a 4-foot loading dock. The platform truck was the right thing in this case, as the forklift had no route to the street level from indoors, and the engine hoist wheels and overall stability are not suitable for rolling under load.

With a 1000 lb load, I was apprehensive about rolling the platform truck by hand down the wheelchair ramp. With the manila rope and recruiting a bystander, I planned to regulate the descent down the ramp by slipping the rope around a railing post, in case the descending mass was too much to hold by hand.

As I pondered this ramp situation, the friendly riggers appeared again. The massive fellow you'll see in the next photo breezed the works down the ramp like he was pushing an empty shopping cart. 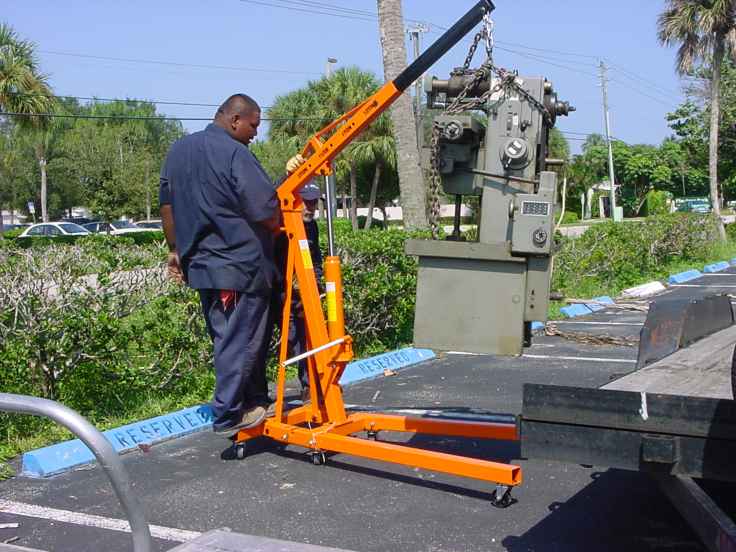 Next I had to hoist the mill off the platform truck and onto the flatbed trailer. With the new crane, I did not anticipate any difficulties. But the riggers seemed interested in the crane, and wanted to give it a try themselves. Who was I to say no?

The fellow standing on the end of the crane is one of the professional rigging team. According to the crew chief (in white cap, look carefully behind the crane), the big guy weighed 535 lbs himself. Based on the crane measurements, I estimate his height about about 6'6". With that kind of personnel, most of your problems are solved.

These cranes are a bit risky, because the footprint is not much wider than where the load's center-of-gravity can swing. It seems to me that one could improve this stability by simply clamping, say, a 10-foot length of SuperStrut across the legs with C-clamps, and blocking under that with lumber. This would provide some "outrigger" style protection against tipping.

Once on the flatbed trailer, I secured the mill to the trailer with a 1/2" carriage bolt up through the trailer floor boards and throught the floor-mounting hole in the mill base. I also cinched the machine down with the yellow ratcheting cargo strap. After a slow ride to the destination, unloading was easy with the forklift available there. Using the forklift, and the same attachment method to the mill, I lifted the mill from the flatbed trailer, drove it to the shop door, and placed it on the platform truck (my forklift is too tall to drive into my machine shop!). I lacked a proper sling hoist at the time, so I used 3/4 inch polypropylene rope instead. The shop crane could have managed the trailer unloading if I did not have the forklift available. Once the mill was indoors on the platform truck, I rolled it to its final position. I removed the caster wheels from the ends of the long legs of the shop crane to allow the legs to slide underneath the platform truck. I lifted the mill with the crane, and rolled out the empty platform truck. I lowered the mill until the base just touched the floor, nudged it by hand until it was in good alignment on target footprint, and gently lowered it the rest of the way. The crane hydraulics make the lifting a lowering precise and gentle, but you must be very careful to slowly open the release valve to avoid a sudden drop.

Others have suggested a "bridging" technique for rolling heavy items lifted by the shop crane: Rather than trying to roll the crane on its wheels while carrying a load on the boom hook, place some sturdy lumber horizontally across the legs of the crane, turning it into an improvised platform truck. This stabilizes the load on the lowest part of the crane, rather than having a pendulous load swinging higher. You could implement this technique with 10-foot SuperStrut outriggers to yield a moving platform protected against tipping.

After cleaning the gore and shredded pants fibers from the end of the leadscrew, I was finally able to put the machine into service. I tested the 3-phase motor with a Mitsubishi Freqrol Z300 variable frequency drive (VFD), using 240 VAC single-phase power into 2 of the 3 input legs. Everything ran smoothly, including the quaint hydraulically-actuated variable-speed main-drive pulleys and all the gearboxes and selectors for the table feed.

Perhaps you're wondering if this classic machine was damaged by the tip and fall. In a testimony to good old American iron, the happy answer is "no". Fortunately, the heaviest force of the landing was absorbed by the rear of the main spindle crushing down on a 3/4" steel pipe (the mattock handle), which buckled and dimpled such that the spindle was not in the least affected. The table leadscrew handle did rake the wall, requiring a slight bend to correct back to normal. I had removed the rear covers altogether, so they were not even touched. One metal cover-mounting bracket was bent, requiring a simple bend to correct. In the end, the machine remained completely in order.

And my leg? That healed without further incident. My pride is still on crutches, which may be for the best.

My new principles of rigging and moving heavy machines:

Have a comment or question about my moving the Clausing 8540?
Email me at:
kinch@truetex.com
Richard J. Kinch
Back to Machine Shop page
Back to Home page