This essay reviews my project in 2003 of moving a large machine tool, using a minimum of equipment and personnel, while keeping the risk of material damage or personal injury low. I've also updated the ideas over the years to include my further experiences, retrospectives, and musings on such tasks.

I've enjoyed a lot of correspondence over many years since then with others who have attempted the valor. That mix of wisdom and folly is incorporated below.

If you can find and hire a trusted and experienced rigger to do this for you, then I advise that method. If such heroes are not available, or you are a proud, adventurous, or intrepid master of the do-it-yourself spirit, here is what you can plan for. 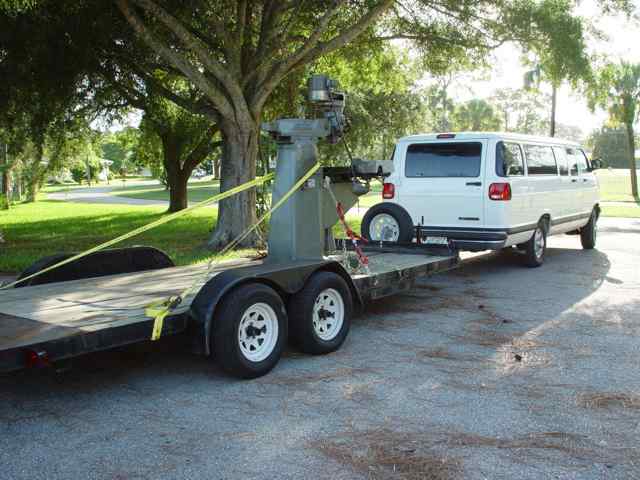 After looking at a lot of Bridgeport machines over some months, I finally found the one I wanted at the right price about an hour's drive away. I had been studying the rigging and moving tasks by watching others doing it at machine-shop auctions, reading various Web pages detailing experiences, and discussions on rec.crafts.metalworking. I had even bought an ancient electric forklift at the local truck auction, and had it delivered by a flatbed wrecker, ready to unload my eventual purchase. The seller of the machine was able to direct me to an inexpensive rental trailer (usually used for car hauling) that could handle this concentrated 2000-lb load, and he also lifted the machine onto the trailer for me using his forklift at his shop. 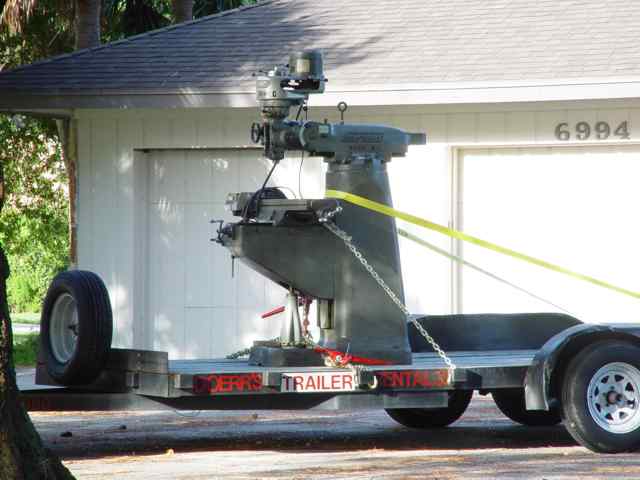 By inspecting the photos carefully, you can see that I secured the machine to the trailer with two cargo chains, one across the base, and another across the knee. I used ratcheting load-binders to tighten the chains. These are items sold at Harbor Freight. The tightening was strong enough to start to visibly flex the frame of the trailer. Scrap lumber and folded corrugated cardboard chocked between the chains and the machine protected the machine from damage.

The knee attachment should be considered only a backup, since the gib lock and leadscrew on the knee cannot be considered strong enough to reliably endure the shock of a lurch in transit. The primary hold-down should be to the base, which I have done with the chain and load binder. Another good technique would be to bolt the base to the floor of the trailer, using 1/2" or 5/8" carriage bolts through the floor planks; of course this might not be suitable for a rented item.

One could also construct a pallet to bolt the base of the machine onto, but this introduces a new critical component requiring some knowledge and experience to avoid a disastrous failure.

I added a third hold-down, using a ratcheting cargo strap, as a kind of stretchy back-up oriented to the rear so as to absorb any sudden load-shift from braking.

I would have considered drilling through the trailer planks and bolting down the machine with 5/8" carriage bolts. However, I wasn't sure if the trailer rental people would be happy with that. Indeed, I later used bolts when hauling another heavy item with this same rental trailer, since I got the OK of the owner beforehand. 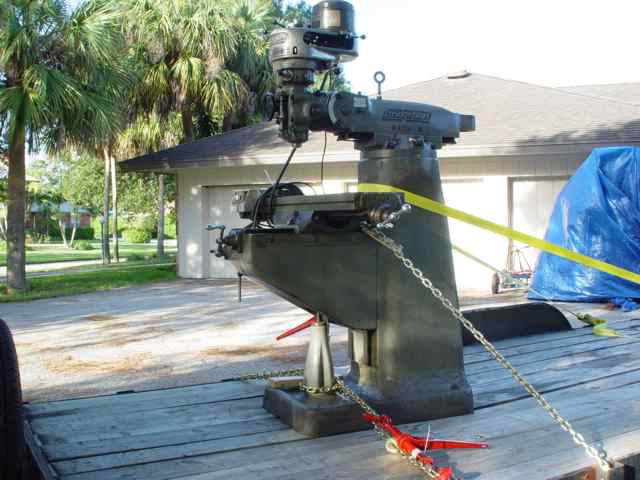 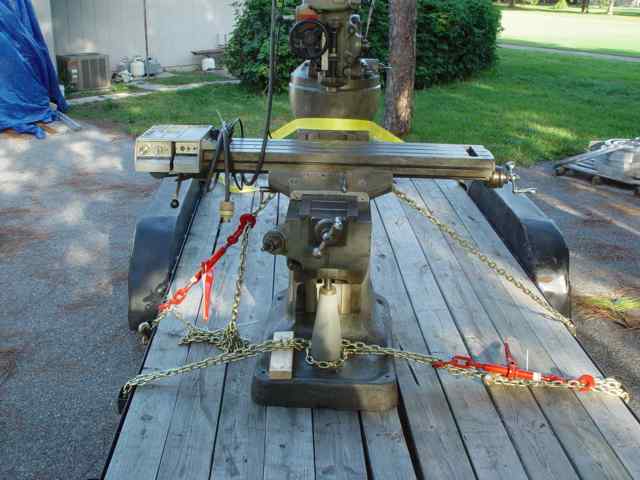 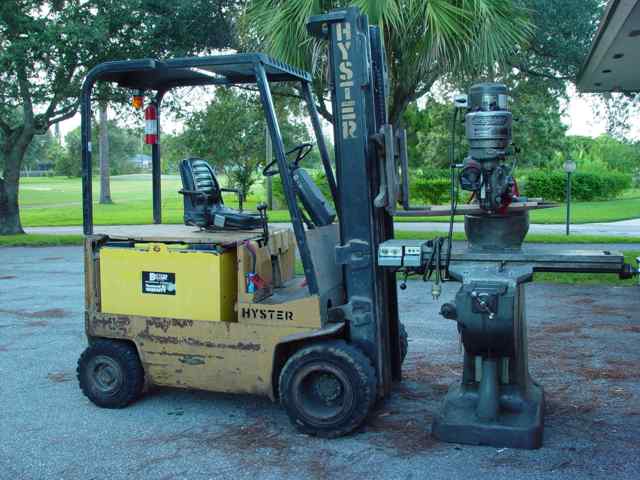 Here is the forklift holding the machine after lifting if off the trailer. 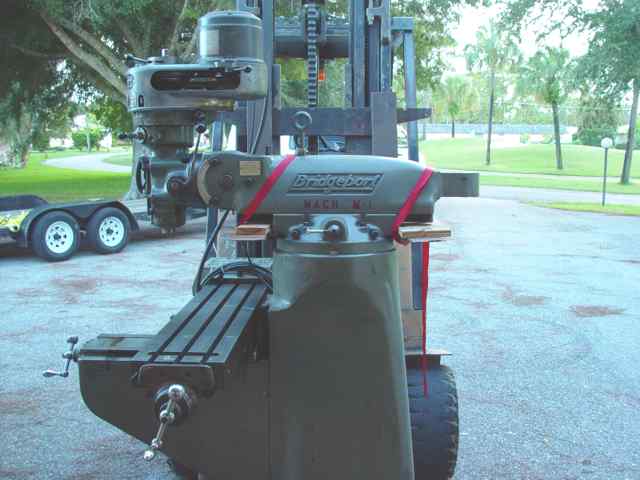 Here's a photo of a good way to lift the machine with forks. The ram is unlocked, moved back towards the rear, and locked in place. The forks reach under the flat dovetails of the ram, with wood chocks in place to prevent damage. A ratcheting cargo strap or other clamp secures the machine to the forks, and helps stabilize the hold.

To help lower the center of gravity (CG) of the machine, you can lower the knee fully. You can also invert the head by loosening and rotating it around upside down; this also lowers the total height of the machine to about 66 inches. I didn't feel this was necessary when lifting under the ram, at least not with a 10,000-pound forklift. But for rolling on pipes, as I did later, the lower the CG the better.

You can also gain a single-point lift using the 5/8-11 attachment hole in the top-center of the ram (shown in this photo with a too-long eyebolt inserted), or with a sling under the ram. However, by clamping the forks under the ram you have much better two-point stability, and clamping the flat forks to the flat underside of the ram tends to control any swaying of the load. I did not use the eyebolt at all; a load-rated hoisting ring would be a better attachment device, or at least a shorter eyebolt than shown. Some have claimed that this hole is for lifting the ram alone during assembly, but Bridgeport's own documentation for the British version shows this is an approved method for lifting the entire machine.

Getting this machine off the trailer and inside the garage door was quick and easy using the forklift. Sadly, the 8-foot-high forklift didn't fit under the 7-foot garage door height, so I had to roll the Bridgeport machine on the concrete garage floor the rest of the way on 3-foot lengths of 1" steel pipe (cut from heavy-wall electrical conduit, cheaper than plumbing pipe). By cutting and welding some solid pieces of steel, I made a "mattock" tool (which has its own project page), which fit under the Bridgeport base and allowed me to tip the machine up enough to get the pipes in or out from underneath. While I could only budge the machine on the rollers a few inches per minute, in less than two hours I had it rolled into the far corner of the room and precisely in a carefully planned position.

Finding the Space for the Machine

A Bridgeport machine requires a surprising amount of clearance in the surrounding space to operate, due to the awkward projection of its components and the ways they articulate. The clearance height for the J-head model is 83-1/2". Bridgeport's floor plan specifies a 63" front-to-back space for the 12-inch knee model, and 75-1/2" of width for the 42" table. If you have CNC controls or a power feed on the table, then with some room for a human operator, you're up to about an 8-by-8 foot floor-space envelope dedicated to the operation of this machine. Add cabinets for tooling, and perhaps a CNC computer rack, and you're at roughly 100 square feet. Given the costs of industrial space, housing "Santa Claus" (he who makes stuff you wish for) is going to impose a true cost on the order of $1000/year, something to consider if you have only casual business uses or hobby applications in mind.

If you're trying to build a pallet to move a Bridgeport machine, or a floor layout, here is my drawing of the Bridgeport base (14 KB PDF file). Bridgeport's documentation specifies a 5/8" bolt for securing the base to the floor via the holes in the base, with a height of 4-3/4" from the top of those holes to the floor.

Some other tips that have been suggested for the moving task:

Have a comment or question about my moving the Bridgeport mill?
Email me at:
kinch@truetex.com
Richard J. Kinch
Back to Machine Shop page
Back to Home page