As a lad of 13 years age back in 1969, I received as a Christmas present the most wonderful thing that my young scientific mind had been yearning for: an Edmund Scientific Company 4-1/4 inch reflecting telescope. For years I had longed to see the heavens magnified, and now I had the essential instrument. Many were the nights I spent happily engaged in learning to navigate the heavens, finding star clusters, planets and their moons, nebulae, and the moon.

One goal I never realized as a youngster was the advanced equipment and techniques to make amateur astrophotographs with my telescope. The telescope itself was hardly an affordable expense for my family, because such things were much more costly in those days, and we were not wealthy enough to indulge a child in the more serious aspects of my amateur-astronomer dreams. Photography would have required an SLR camera, an elaborate mounting system, and perhaps most significantly, lots of expensive film and processing. So my youthful observations are only distant visual memories.

Nearly 35 years later today, I find that digital photography and my machine shop have made my lifelong dreams of astrophotography realizable. I was able to design and build a camera adapter for my childhood hobby telescope (which I still have). My 5-megapixel Sony DSC-F707 (F-707) (mechanically equivalent to the Sony DSC-F717) camera now snaps inexpensive images that exceed the resolution of the telescope optics, with instant viewing for correction of exposures and alignment.

The occasion that finally motivated me to complete this project was the historical opposition of the planet Mars in August 2003. This approach was widely reported in the popular press, as the closest this neighbor has been in 60,000 years. The disc of Mars presented about 26 seconds of arc, which with the camera zoom and 150 magnification of the telescope, covered about 120 pixels of diameter. This was an excellent subject for my situation, since our night skies here in southeast Florida are washed out by city lights, but good astrophotography is still possible for the very bright planetary discs.

This was definitely a machining job for CNC methods. It required cutting a 5-inch arc into side of a 1.25-inch aluminum extension rod to fit the outside radius of the telescope tube. The CNC ability also let me program a tool path to cut a 1.25 inch diameter hole with radial slots for a round bar clamp on the camera stage. These circular shapes would have normally required a boring bar, or large (expensive) rotary table, but I was able to execute them with circular interpolation in software using only an inexpensive end mill. Although I do not have ballscrews yet installed, the backlash compensation in TurboCNC was able to cut arcs with acceptably minimal distortions.

Here are two of the better photographs I was able to snap of Mars in opposition, and a third photograph taken by the Hubble telescope the same week. You can see the South polar ice cap at about 2 o'clock orientation, and some darker regions around the center of the disc. Considering the modest telescope I used, these are remarkable pictures. The Hubble picture was taken at a different time of the Martian day, so the dark and light regions of the surface don't quite match up to mine, but it is interesting to compare and see that some surface features are vaguely visible with such a small telescope. In this case, the photos look better than the live visual image, since you can better control the contrast, brightness, and other processing issues. The colors in my image are adjusted to be the actual colors in the scope view, at least as rendered on my current CRT display monitor. 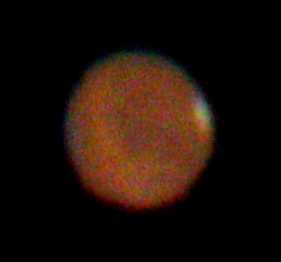 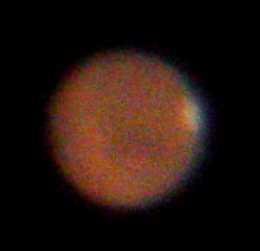 If you compare my two images, the discs are a bit oblong due to some shaking of the telescope mount, and due to the lack of a clock drive for the 1/30 and 1/6 second exposures (south being to the right, the smearing of sidereal motion in the image is directed up, and amounts to about 3 pixels). This is due my loss some years ago of the original Edmund equatorial mount for the telescope, which occured when I went to a night launch of the Space Shuttle and left the mount behind on the very dark Cape Canaveral roadside! (Let me know if you were the one that found it.) I despaired of the expense to replace such a mechanism for my vintage telescope, since the scope has such little value (other than sentimental) these days with with advent of imported optics, and any money spent would be better applied to a more advanced unit. Then I conceived of improvising a mount from a pipefitters vise (which has both a base that swivels and jaws that swivel) on top of the high-speed grinder pedestal, which together make an alti-azimuth mount. While the vise "bearings" are crude and difficult to position, it works. Of course I keep thinking that the machine shop should be put to building a precision equatorial mount and tracking drive, someday.

Have a comment or question about my digital camera telescope adapter project?
Want to purchase a custom-made adapter?
Email me at:
kinch@truetex.com
Richard J. Kinch
Back to Machine Shop page
Back to Home page