This page gives technical and service information on the NSA (National Safety Associates) "Sparkling Water System", a device for carbonating beverages at home. Manufacturing of this system, originally in the 1990s, (history) appears to have been defunct for many years, and parts and refills for the system have long been unavailable. The original assembly was their part number NSA200SP, and the replacement CO2 cylinder part number NSA200SPR.

A corporation in 2012 was using the name "NSA" but it is unclear whether this is the same enterprise that made and sold the carbonation system, or an unrelated successor business. Indeed, their own self-reported history doesn't mention the carbonation system. Of course, none of this has anything to do with the US government agency known as the NSA.

I am writing this page to document the technical details of what was overall a well-designed and well-made system for carbonation, despite its commercial demise. Why did NSA fail at making an ongoing business of equipping and supplying ordinary consumers to carbonate beverages at home? It was not due to any technical faults or hazards in the equipment. In my opinion the business was not profitable because it was based on an grossly overpriced CO2 resupply that was primarly designed to further a direct-sales scheme. This was essentially the old sales trick of razor-and-blades: the initial equipment purchase was reasonably priced, while demand for CO2 refills would yield ongoing sales. The flaw here is that the CO2 was marked up in price over 10 times the commodity market, to the point where you paid more to make carbonated beverages yourself than it cost to pick a ready 2-liter product from a retail shelf. While doing-it-yourself can be very entertaining, it cannot long endure the unfavorable economics. Compare the obsolete NSA system to the more recently popular and commercially successful sodastream system. The sodastream is virtually identical to the NSA system in its fundamental physical principles of operation, namely: (1) use proprietary CO2 cylinders, and (2) inject CO2 directly into special-purpose bottles via a cap fitting. The sodastream system is likewise astonishingly expensive to refill ($30 retail as of this writing for the 0.9 lb CO2 refill, versus the 20 lbs you would get at an industrial gas supplier for that price), costing more to operate than simply opening a bottle from the grocery store. The sodastream advertising and labeling promise physically impossible yields based on delivering lower carbonation levels ("less fizzy") than commercial bottled soda (410 grams does not carbonate 60 liters at 4 volumes). Like vacuum cleaners, air compressors, stereo loudspeakers, and electric cars, the power and mileage claimed in advertising are simply not true.

To achieve true economy, simplicity, and the finest quality when carbonating at home, use the simple bottle method with standard CO2 cylinders. See my essay on Carbonating at Home. These superior techniques are not so widely known or publicized, because they are so truly economical that there is little commercial profit in the equipment or supplies. Instead we are told by the world's most beautiful woman to buy costly gadgets that do not carbonate to commercial standards, require more user attention and labor, and multiply ongoing costs.

Like most actors, my real job is saving the world. Start with plain water, add bubbles, mix in the perfect flavor. Look! Soda that's better for you and all of us.
-- Scarlett Johansson, promoting Sodastream.

I'll also describe how the proprietary NSA CO2 cylinder can be retrofitted for refills at ordinary gas suppliers, and then reused as the basis for an economical home carbonation system using standard fittings. 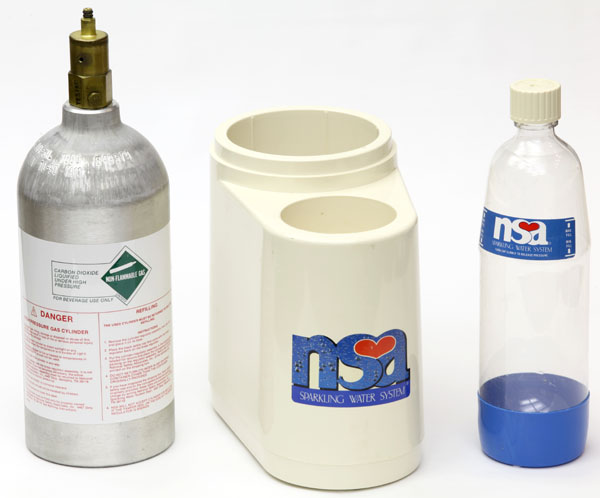 Overall arrangement: As shown in this photo, the NSA carbonation system provides a beige ABS plastic housing (center of photo) with two receptacle stations, one for the CO2 gas cylinder (standing in left of photo) and a second for the beverage bottle (standing in the right of photo). The larger receptacle receives the inverted CO2 cylinder, which can then covered by a matching plastic cover for a better appearance. The smaller receptacle receives the inverted beverage bottle with its cap on.

The center of the bottle cap has a hole covered by a rubber pinch valve, which is pierced by a quill in the receptacle to inject the CO2 gas into the beverage space.

The tip of the cylinder regulator is 1/4 inch outside diameter with a 0.076 inch hole. Inside this hole is a Schrader type valve. When you insert the tip of the inverted cylinder into the receptacle, a 1/16 inch roll pin in the center of the receiver fitting depresses and opens the Schrader valve, releasing low-pressure CO2 into the system. The regulator tip also is fitted with two o-rings (standard AS568-007 size) that seal the gas connection when engaged. 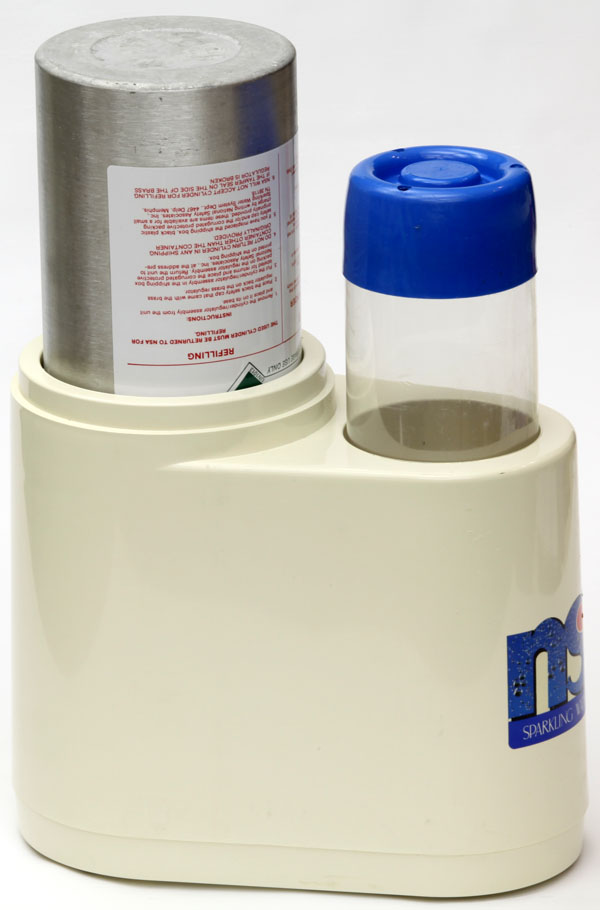 CO2 and beverage connection: This photo shows the countertop unit with the CO2 cylinder and beverage bottle installed. When engaged, CO2 gas at a low regulated pressure flows through a passage to the bottle receptacle on the other side of the unit. When you insert an inverted bottle into the receiver as shown here, the bottle cap simultaneously (1) depresses a lever which opens a valve in the CO2 passage and, (2) engages a thin filling quill which probes into the rubber pinch valve in the bottle cap. Thus each press of the bottle into the receiver injects a bolus of CO2 gas into the bottle. Since a proper level of carbonation requires that 4 bottle volumes of CO2 enter the bottle and dissolve into the beverage, you must remove the bottle, shake, and repeat several such presses to completely carbonate a beverage. The bottle also displays a label with a fill mark to indicate how much of an unfilled headspace should be left in the bottle.

Inverting the bottle helps mix and dissolve the CO2 gas into the beverage, since the gas first flows up through the beverage instead of directly into the headspace as it would if the bottle were upright. (Similar systems working with upright bottles can provide a dip tube to provide the same effect.) A disadvantage to inverting the bottle is that small amounts of the beverage will leak past the fittings when engaging and disengaging, since the liquid is under pressure. When carbonating plain water this is not a problem, but soft drinks or juices leave a residue that requires cleaning, and cleaning in turn is a difficult chore with the recessed receptacles involved in this part of the apparatus. 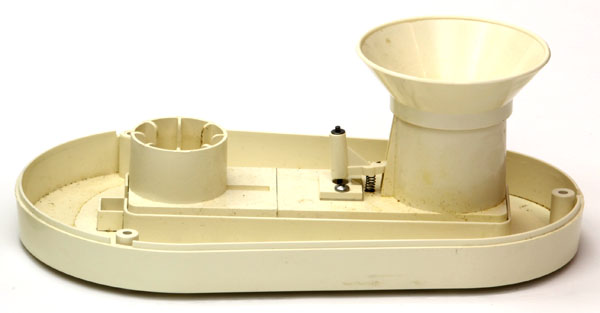 This photo shows the base of the unit with the upper cowling removed. On the left side is the CO2 gas receptacle, and on the right is the bottle receptacle. A passage runs from left to right deliver gas from the cylinder to the bottle. Just to the left of the bottle receptacle is the spring-loaded lever which opens a valve in the passage to allow CO2 to flow into the bottle when the bottle cap engages the receiver. The plastic passage and valve are all permanently glued together in the rectangular housing, so no repairs or non-destructive inspection are possible.

CO2 cylinder: The CO2 container is properly called a "cylinder", never a "tank". The cylinder size is 4.38 inches diameter, 10.3 inches high (that is, to the top of the neck, not including the brass regulator and valve). The DOT stamp on the shoulder of a specimen cylinder reads, "CTC/DOT-3AL 1800 B47727 CLIFFDIV 10-90 IA11", which indicates a service pressure of 1800 psi, manufactured by Catalina Cylinders Cliff Impact Division. This matches the Catalina model B2.5 CO2 cylinder (specification), which gives a capacity of 2.5 lbs of CO2 (equivalent to a water capacity of 102 cu in).

CO2 regulator: Unlike a standard CO2 cylinder with a shut-off valve and high-pressure connection, the NSA proprietary system used a proprietary valve and regulator with no shut-off valve. The cylinder itself is a standard type which itself was not proprietary to NSA; the NSA valve installed on the cylinder made the assembled apparatus non-standard. At left is shown the regulator, valve, and dip-tube assembly, which I have removed from an empty cylinder. The output from the cylinder was CO2 gas regulated down to a low pressure suitable for filling the plastic beverage bottles. A dip tube on the valve delivered gas out when the cylinder was inverted in the receptacle.

Refilling scheme: The non-standard valve fitting also was meant to prevent any local gas suppliers from economically refilling the cylinder with inexpensive CO2, and instead require that you return the entire cylinder to NSA for refilling at an exorbitant price. Inspection of the disassembled cylinder reveals that the fitting for filling was simply a standard 1/4 inch flare fitting with a standard Schrader valve and brass cap. Onto this fitting, NSA would apply a shrink-wrap label that ominously stated, "SAFETY SEAL--DO NOT REMOVE". The NSA label on the cylinder, besides the usual DOT recitations, gave refilling instructions, which consisted of a stern message to return the used cylinder to NSA, and a warning that they would not accept cylinders with a broken "safety" seal.

Resale and shipment of the CO2 Cylinder

Pressurized cylinders are considered hazardous materials for transportation in the USA. It is impractical or prohibited for individuals to send them via mail, common carrier, airline luggage, etc. Even though UPS and FedEx accept compressed gas cylinders for ground shipment, this involves special packaging and fees for hazardous materials. If you empty the gas and remove the valve so that no pressure or hazardous contents are inside, then the open cylinder is no longer hazardous and may generally be shipped without any special consideration. This should be as easy as removing the overpressure burst disc plug from the valve, and not as difficult as removing the whole valve from the cylinder. But whether a carrier will accept a removed plug alone as proof of non-hazardous condition is uncertain.

While an old, empty cylinder in good condition has some value for retrofitting into a standard cylinder by changing the valve, refilling with CO2 will require a fresh hydrostatic test and certification, the cost of which may exceed the salvage value of the old cylinder.

Reuse as a Standard CO2 Cylinder

The cylinder can be converted from the proprietary NSA assembly into a standard CO2 type by simply emptying the contents and replacing the valve with a standard CGA 320 type CO2 valve. The new valve must fit the neck thread on the cylinder, which is a standard 0.750"-16 size, not anything proprietary like the NSA valve itself. Any local gas supplier should be able to perform this conversion, subject to the need for a current DOT hydro inspection and stamp on the bare cylinder.

Have a comment or question on this carbonation system?
Email me at:
kinch@truetex.com
Richard J. Kinch
Back to home carbonation page