This page shows several improvised machines for weaving Visco-type pyrotechnic fuse. It also gathers links to photos documenting older commercial machines. Visco was one brand of such machines, which is the name now commonly used for the generic fuse product.

Visco fuse consists of an inner core of finely granulated black powder, contained in a spiral-wound wrap of cotton threads, which in turn is surround by another spiral wrap in the opposite winding direction. Tracer threads may be entrained in the powder core. This powder-cored twine is then coated with colored nitrocellulose lacquer to bind, stiffen, strengthen, and waterproof the fuse with a combustible coating. Typical diameters are 1/16, 3/32, or 1/8 inch, or 1 or 2 mm. Visco fuse is also known as cannon fuse or safety fuse. Japanese time fuse (1/4 inch diameter) is a similar item used for time delays in pyrotechnic shell building, but incorporates an additional thick layer of asphaltum.

The first machine is by "yuvyuv" (email) posting on the newsgroup rec.pyrotechnics (as "Yuv"). See the original thread [groups.google.com] discussing the machine, and a follow-up thread which includes Yuv's description of how the machine works. 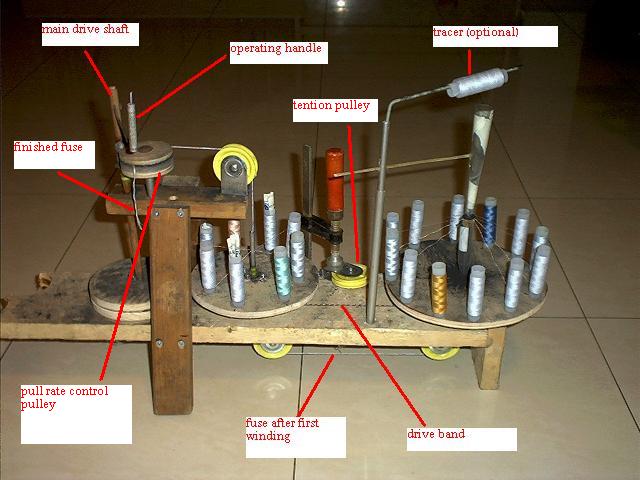 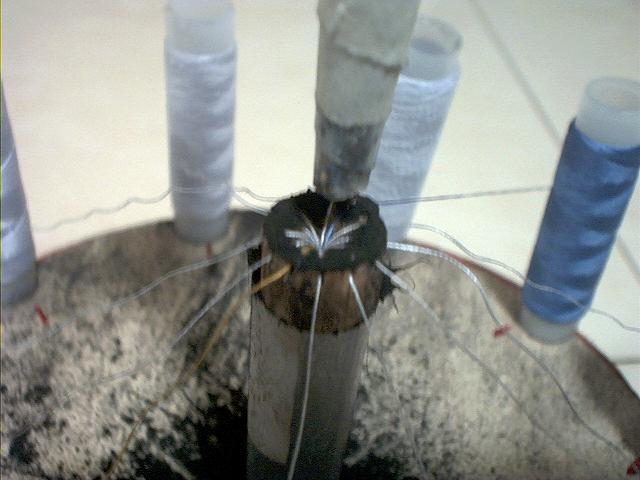 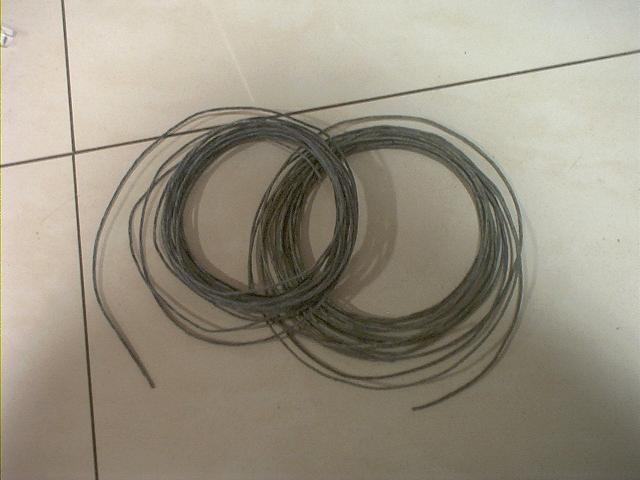 These nine pages of drawings [215 KB PDF file] show a different design and CAD model by Daniel Turner. The model is missing critical items like the funnel and spinneret, and thus are not detailed enough for fabrication.

Ryan Turner created an fuse-weaving machine from K'NEX (http://www.knex.com/) construction toys. He described this in a rec.pyrotechnics thread thread [groups.google.com], and offered the following photos and descriptions showing the mechanism operating with an inert core substance (table sugar):

This is an overview of the entire machine. It has two rotating disks with eight rolls of thread a piece. They are positioned vertically. 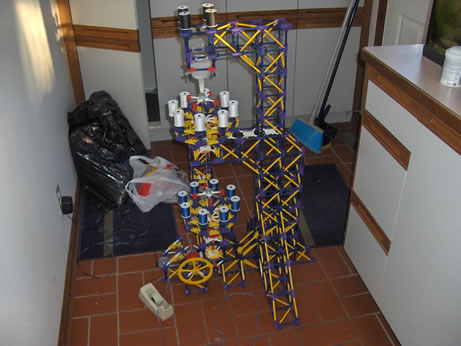 The "White" die (named because the first thread is white) is where it happens. It took two tries to get a working die, this is really the only important part. The brass tubing needs to be lowered as far as possible without jamming up the white threads wrapping around it. Currently about three quarters of the sugar that leaves the funnel gets woven into the fuse. 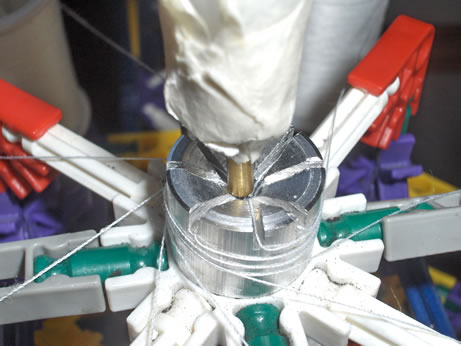 This view is a bit clearer. Its pretty much magic that it works, I never expected it to weave in so easily. It doesn't look like its possible for thread to just wrap around a powder but it works! 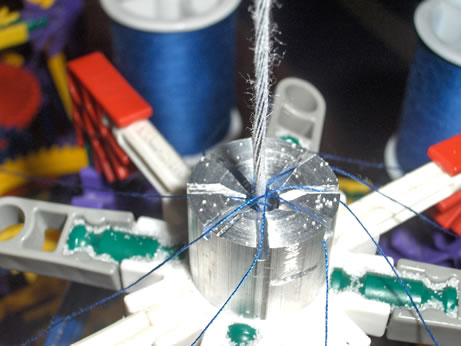 Here is the second die (the "blue" one). The machine isn't operating when I took these pictures so there is no sugar. The blue die isn't really that important. 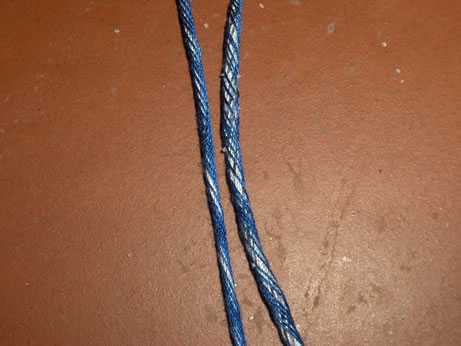 This is a comparison of the fuse with no sugar inside (left one) and fuse with sugar inside (right one). As you can see, the sugar can work its way out (which is why I need thicker thread) but it works beautifully. 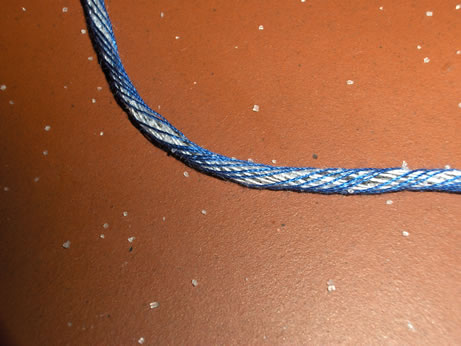 Just a close up of the fuse. The sugar on the ground didn't leak from the fuse, any sugar that doesn't get woven into the machine hits the spinning disks and flies everywhere. I'll have to use the machine outside. 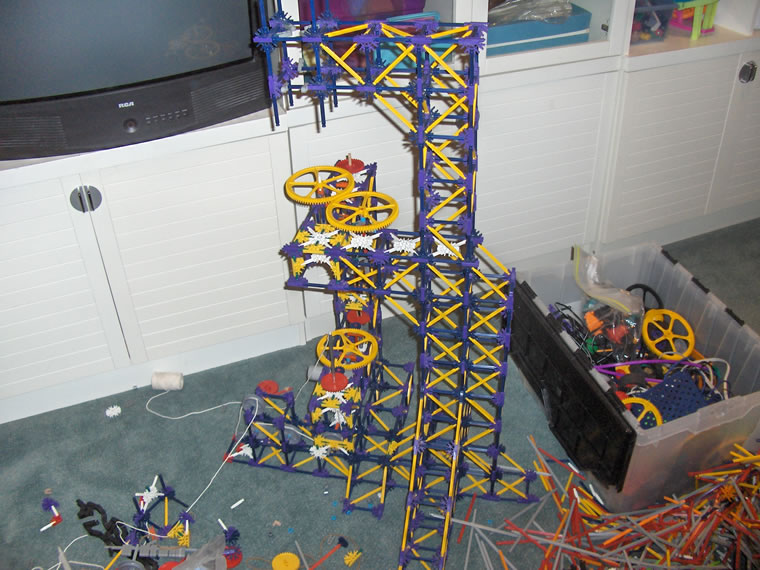 This K'NEX design was later updated to a second version. The main additions are a drying tunnel, lacquer applicator and a better reel where it winds up. 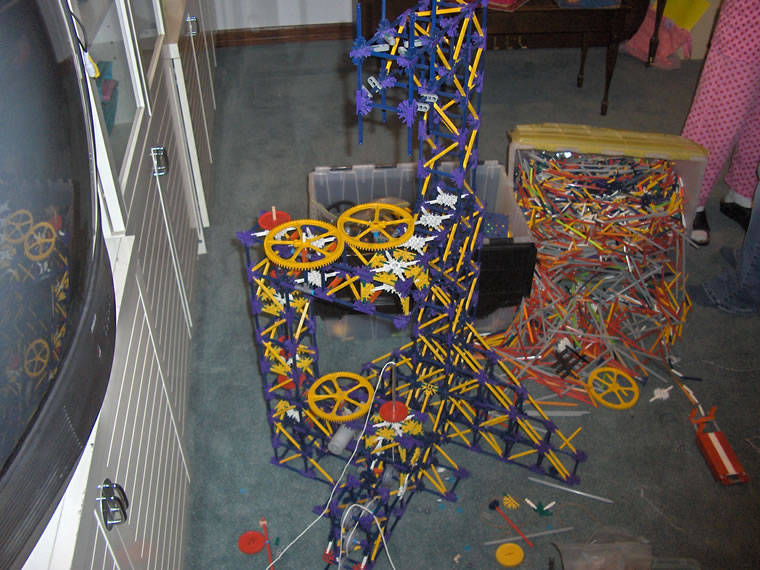 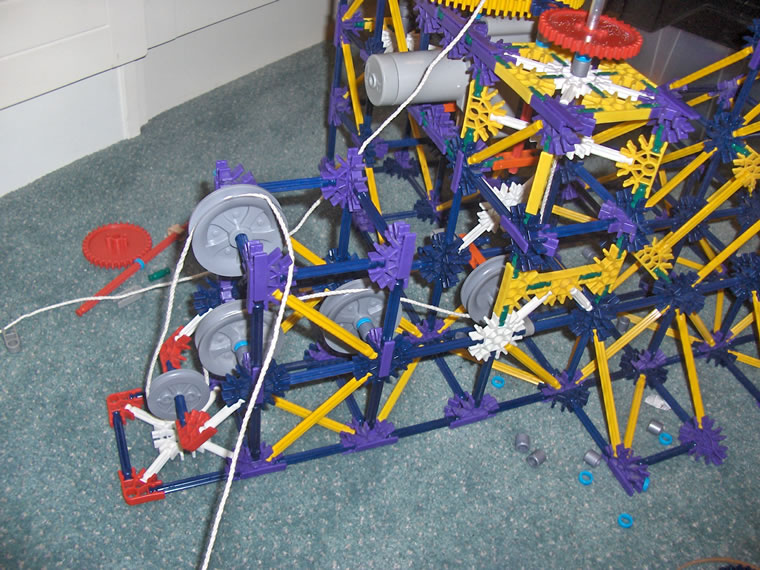 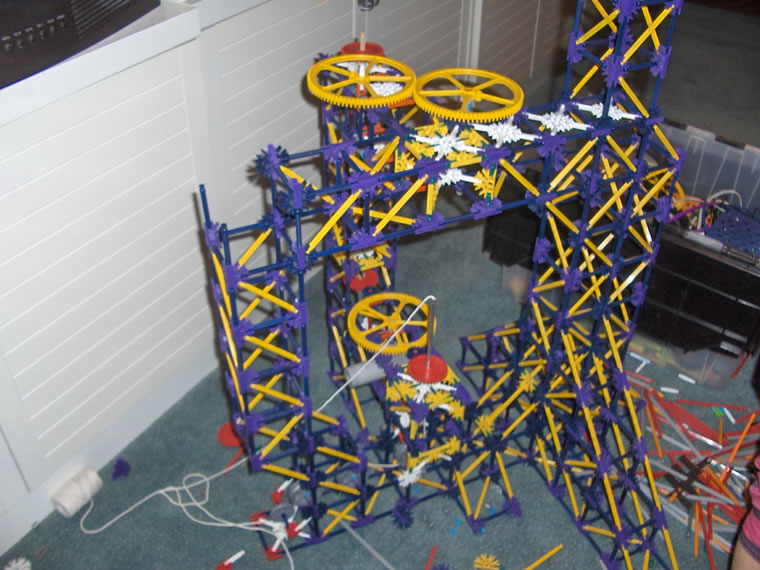 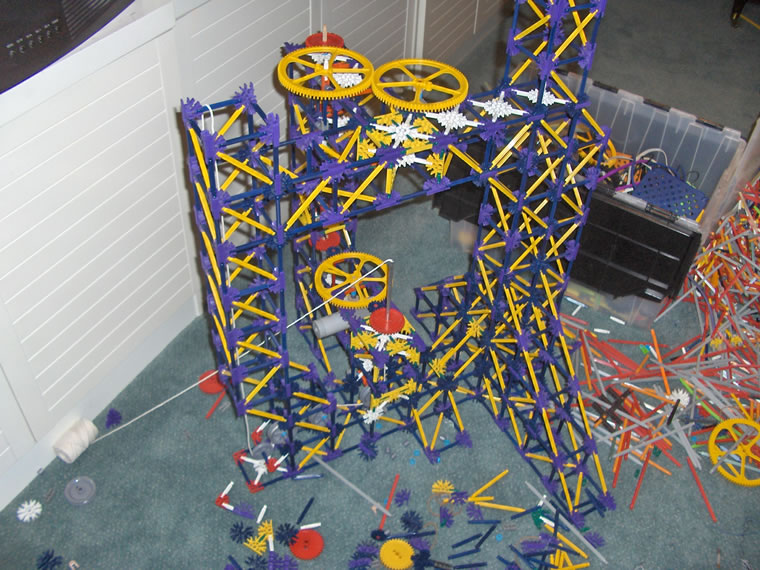 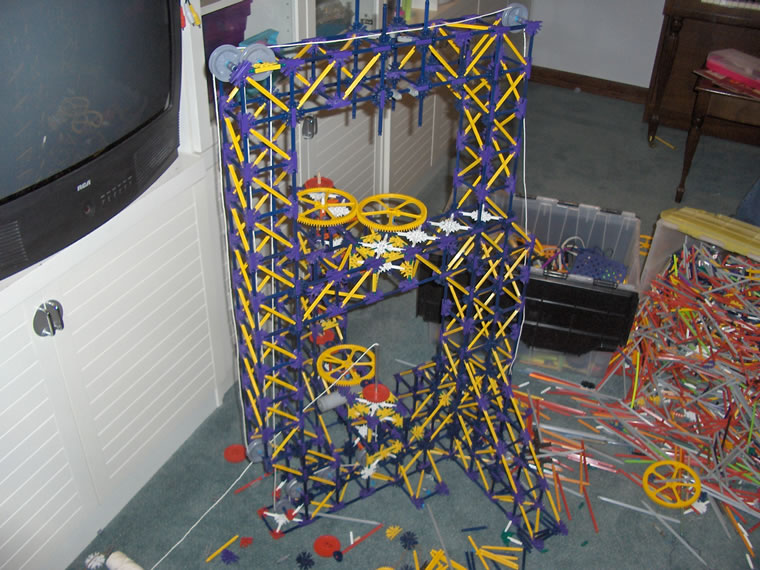 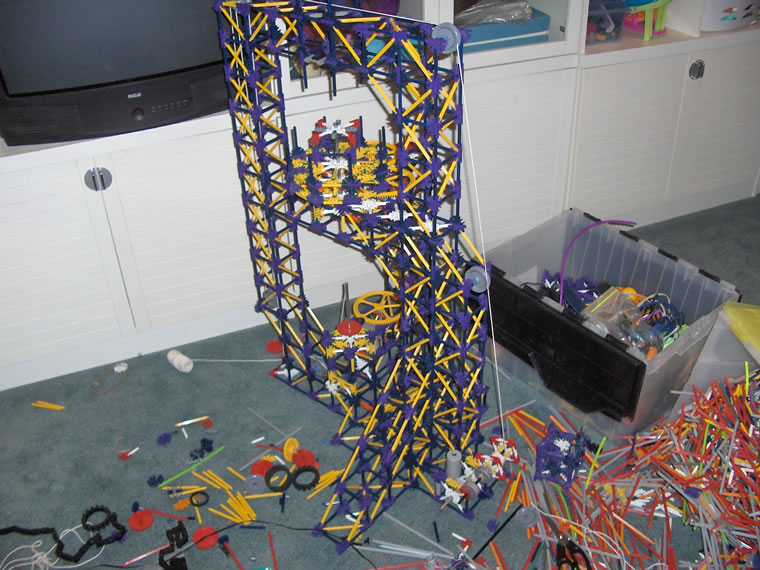 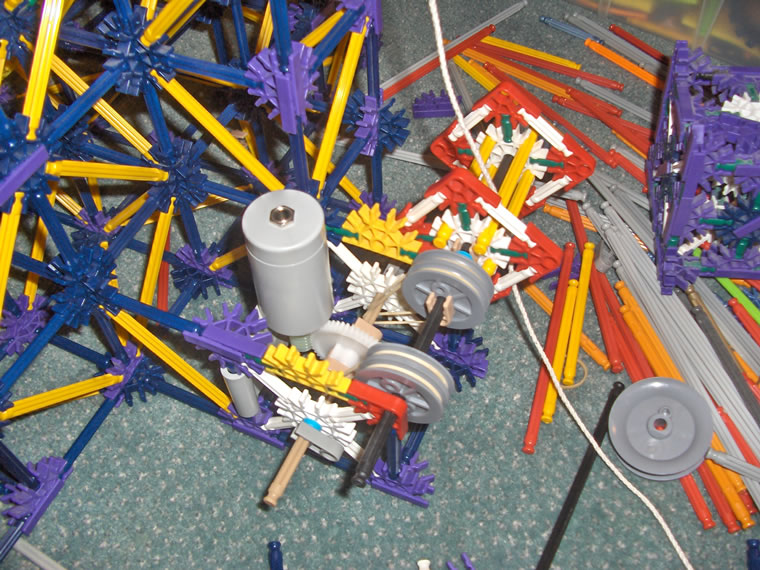 The finished fuse winds up on this reel. It is now powered by a separate motor. I am guessing it can hold around 30m of fuse. Once your finished, the reel just slides off and you can unwind the fuse from it. 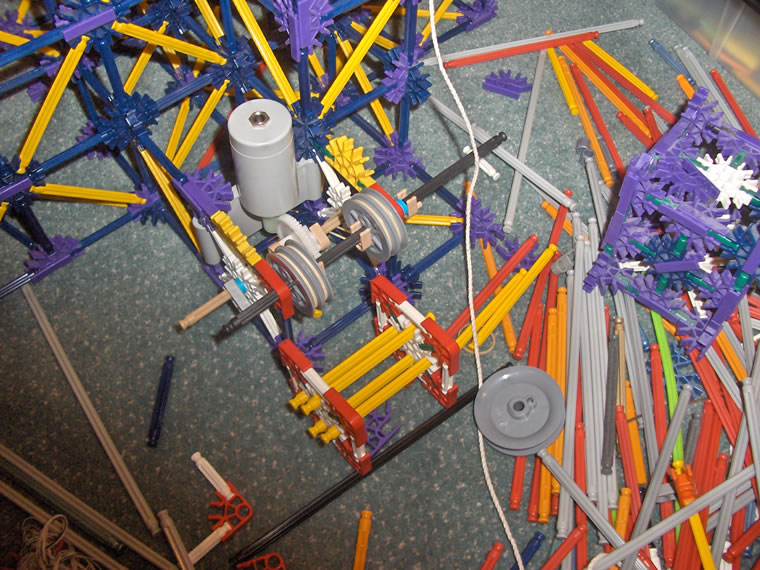 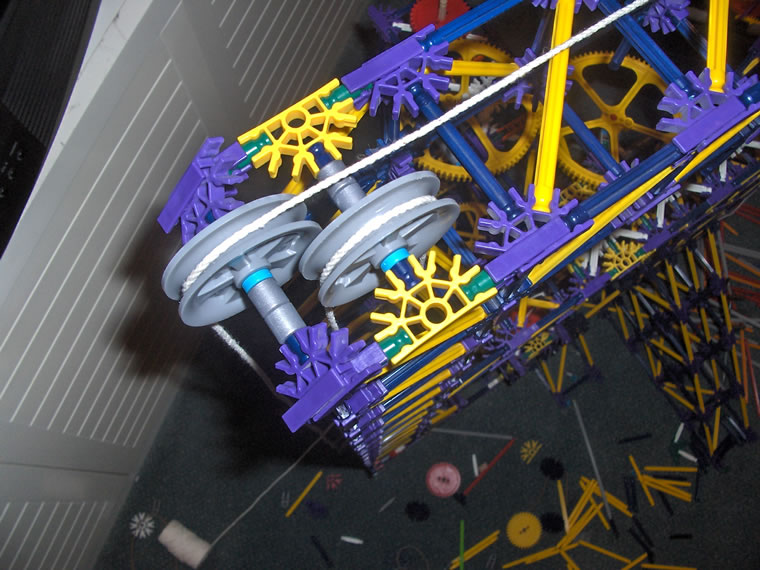 This is the drying tunnel. The fuse takes three passes through it and I'm guessing its about a meter high. 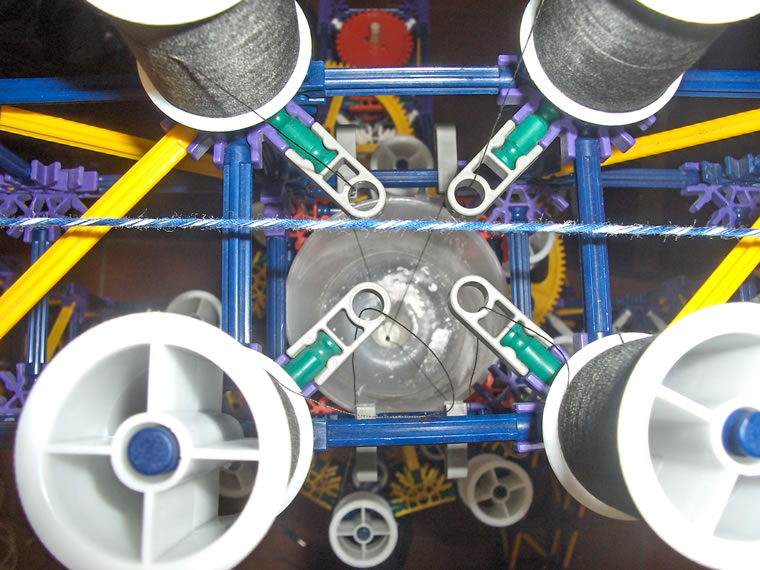 And here is a bit of a play by play of how the powder becomes a fuse core. The powder is loaded into the funnel and gets pulled down by the four tracer threads. 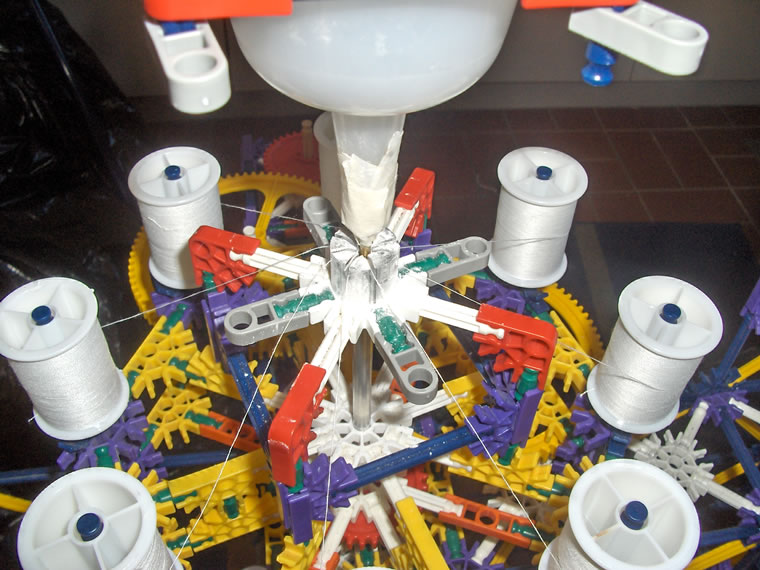 The powder gets wrapped by the first threads.

The powder, now wrapped in a core surrounded by white threads, gets wrapped in the opposite direction by blue threads (The machine is off so the threads aren't twisted). 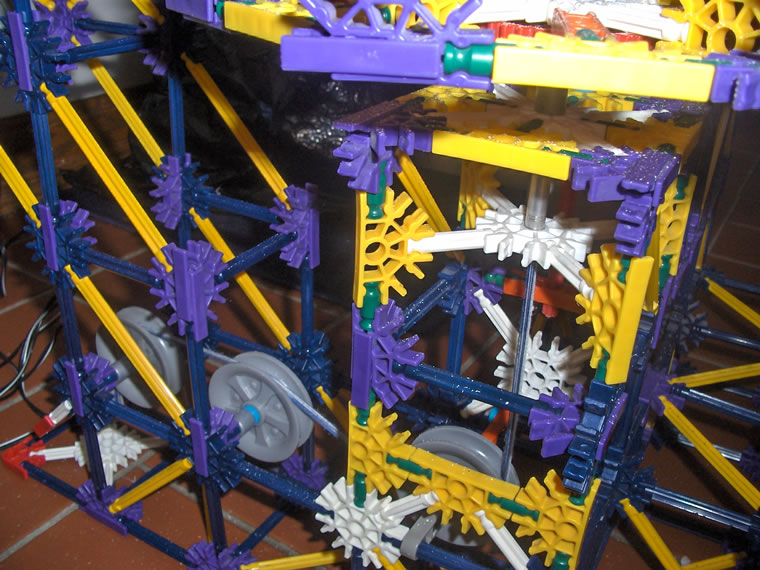 The fuse goes through a series of pulleys to bring it to ... 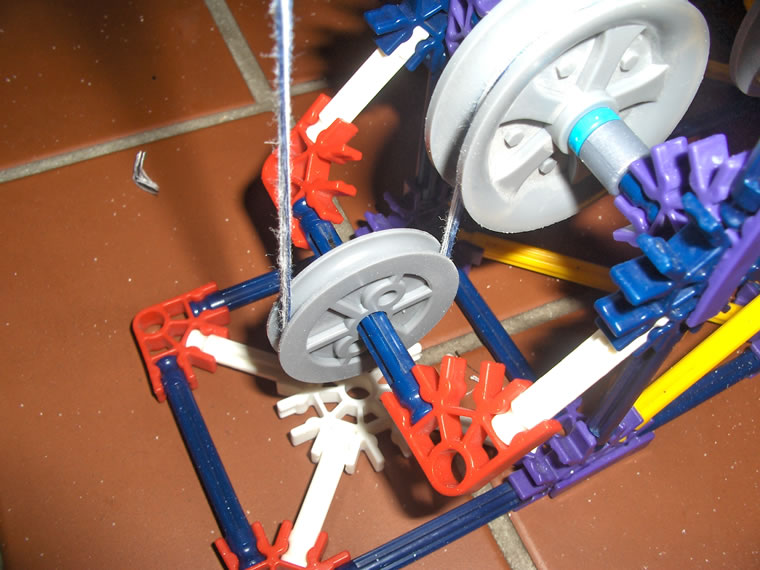 The lacquer will be in a small cup/dish under the small pulley. 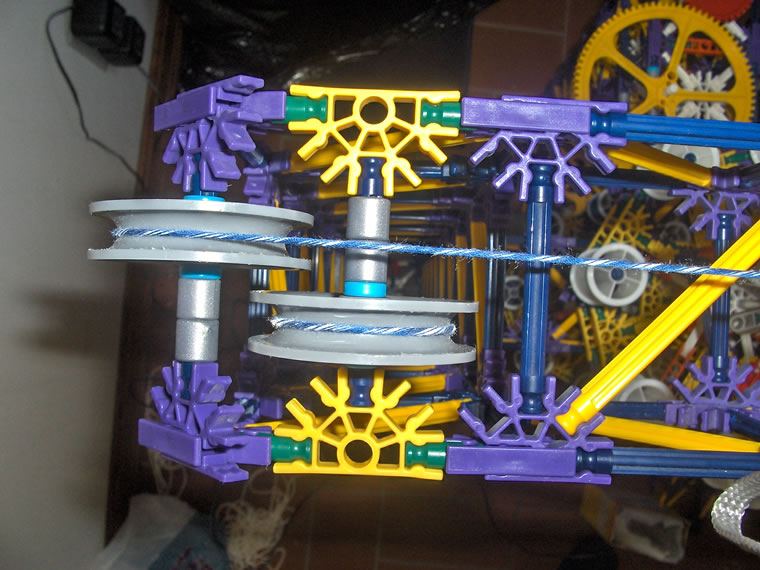 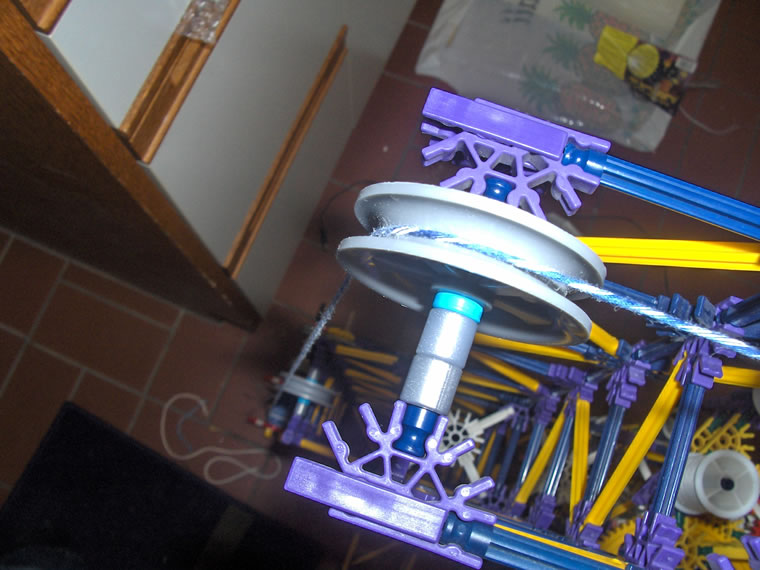 And goes across the machine, going down on the other side (add about one and a half meters to the drying time). 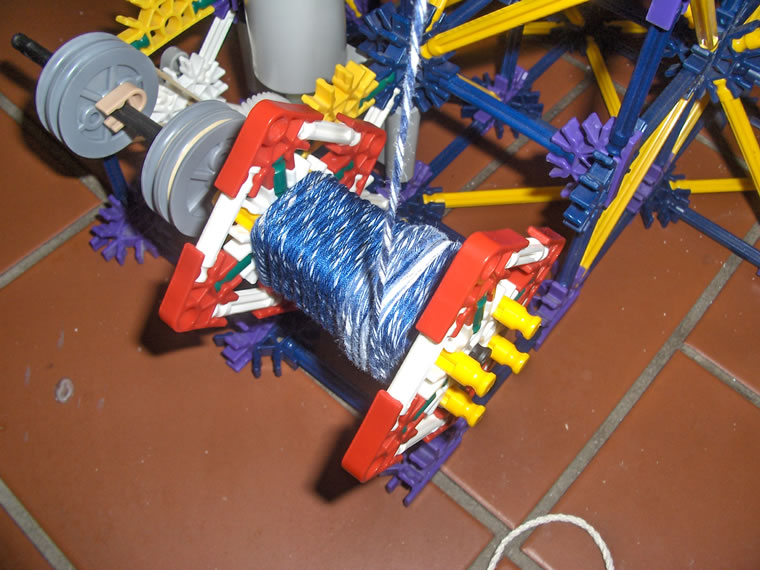 The fuse spools up onto this thingy. 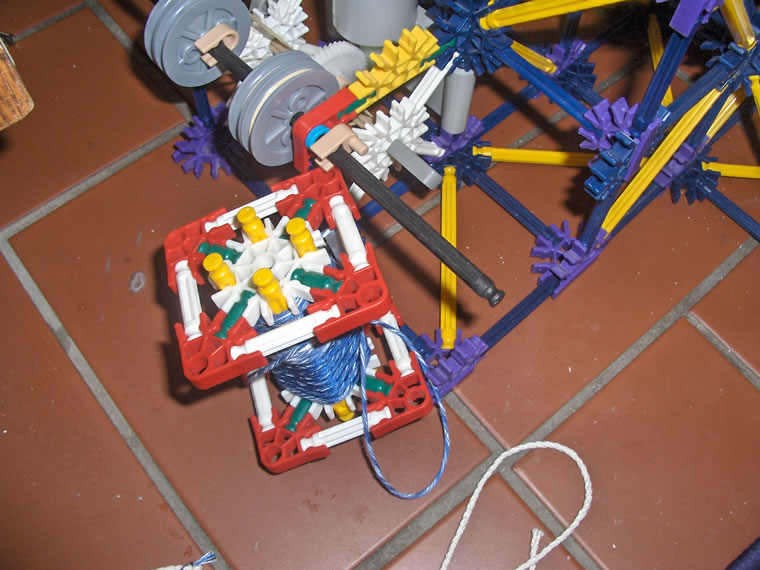 Which then slides off.

And here are the results (no lacquer). An empty fuse is on the right, the fuse with stuff in it is on the left. 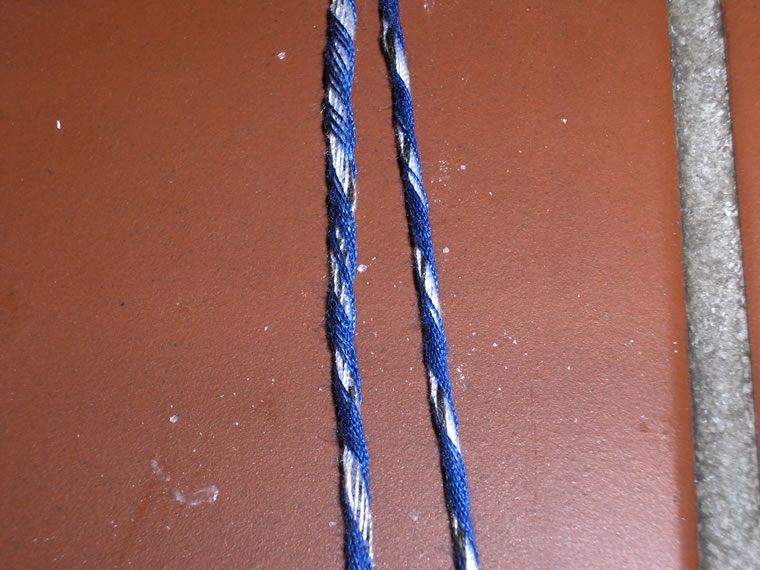 The sugar is, as usual, working great. This picture is nice because near the bottom you can see the sugar trapped under a lattice of threads. 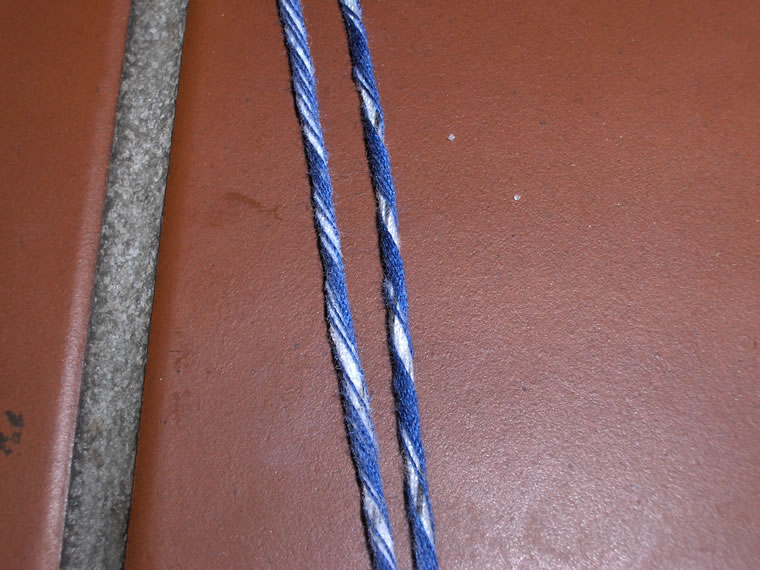 This one is a little less inspiring however it still worked. Most of the cornstarch simply coated the threads however there is a core of pure cornstarch in the center.

Have a comment or question about the Visco-type weaving machine?
Email me at:
kinch@truetex.com
Richard J. Kinch
Back to Machine Shop page
Back to Home page